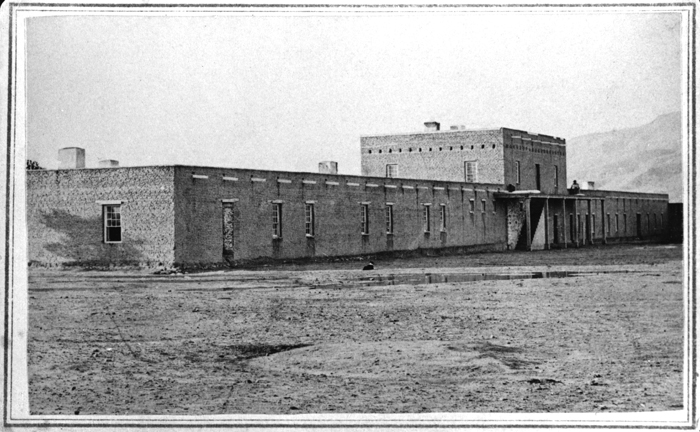 As early as 400 A.D. Native American foragers and farmers, the Mogollon, lived and prospered on the same land that would become Fort Selden centuries later. The Mogollon lived in earthen pit houses throughout the Southwest borderlands near primary trade routes that connected central Mexico with the lands to the north. By the 1400s the Mogollon disappeared from the region.

In 1598, Spanish explorer Juan de Oñate formally established a trade route for the Spanish known as El Camino Real de Tierra Adentro, or the Royal Road to the Interior. During this time, the area was known as Paraje Robledo, or Cruz de Robledo, a welcome paraje—campsite—on the trail where travelers could refresh themselves with water before entering a treacherous 90-mile stretch north that became known as Jornada del Muerto, or Journey of Death.

In 1848, New Mexico formally became a United States territory. With the new government came more settlers further encroaching into the traditional homelands of the Apache leading to a worsening of hostilities that had been increasing throughout the 19th century. In an effort to bring peace to the region, the U.S. government established Fort Selden in April 1865. The New Mexico Volunteers and troops from California constructed the adobe buildings. For 25 years, about 1800 soldiers were stationed there protecting settlers from Native American raiding and general lawlessness. They also escorted travelers throughout the New Mexico Territory.

A soldier’s life in a small western fort was not easy. It was comprised of long stretches of tedious monotony with brief moments of conflict. Overall, the pursuit of entertainment cost more lives than the enemy. In those 25 years, only three soldiers died in combat.

Several of the units that served here were African American only regiments referred to as Buffalo Soldiers. Their tenacity in a fight gained the fear and respect of the Apache from which their name originates. Buffalo Soldiers performed many vital roles at Fort Selden including escort duty, scouting local terrain, and tracking reported raiders.

In the late 1880s, Arthur MacArthur, a Civil War veteran and recipient of the nation’s highest military distinction, the Medal of Honor, was post commander. His young son Douglas, who lived at Fort Selden with his father and family, later came to fame as a general in World War II, also receiving the Medal of Honor. Fort Selden was abandoned in 1891 as hostilities lessened and the needs of the military changed.

In honor of his father’s wishes, Harry Bailey Jr. donated the land today known as Fort Selden Historic Site to the State of  New Mexico and several parcels of land between 1970 and 1990. The Fort was dedicated as a State Monument on July 2, 1973.

Today, ghostly adobe ruins are all that remain of Fort Selden offering visitors a glimpse of another time. The visitor center offers exhibits on frontier and military life and showcases historic military artifacts and photos. As one of seven historic sites in New Mexico, Fort Selden plays an important cultural, historical, and educational role in presenting the history of New Mexico.