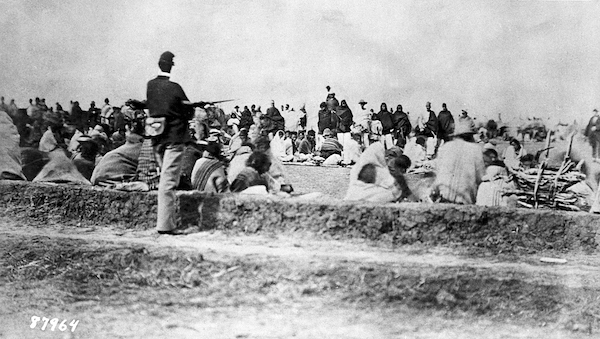 The center of a million-acre reservation known as the Bosque Redondo, this site represents one of the most tragic periods in American history.

As Spaniards, Mexicans and Americans settled in the territory of New Mexico, they were subject to raids from the Navajo and Mescalero Apache people who fought to maintain their traditional homelands and to obtain valuable resources from the settlers.  In efforts to control the raiding the Spanish, the Mexicans and then the Americans, fought the Indians.  Treaties were written and broken, nothing much changed. Raiding continued until the early 1860s when a significant military force became available.

In 1863, when the US Army had defeated the invading Confederates in New Mexico, there was a large enough military force available to deal with the “Indian problem” . It was decided that these problematic Indians would be brought to a spot far away from the populated areas of the Territory. There they could be taught to farm and learn the ways of the white man so they would stop their raiding and settle down.

Known by the Navajos as the "Long Walk," over 50 different groups were forced to walk a distance of more than 350 miles to the reservation in east central New Mexico. It was an arduous journey that saw them travel 12-15 miles a day, often in chilling cold or stifling heat. The Navajo continued to arrive at Bosque Redondo for a period of over two years.

At its peak in the winter of 1864, more than 8,500 Navajo and nearly 500 Mescalero Apache people were held at the Bosque Redondo Indian Reservation.

Most of the Mescalero Apache became so disenchanted with life as farmers and the meager rations that they left in the night during November of 1865 to go home. A small group who could not keep pace with the hasty departure, stayed behind to keep the campfires going so the army would not realize that the tribe had left.

For the Navajo, another three years of crop failures, suffering and death preceded the arrival of General Sherman and his Peace Commission to investigate reports of government waste and mistreatment of the Navajo. He found the reports to be true and began to affect solutions; he first offered the Navajo leaders an expense paid trip to Oklahoma. They turned him down and instead asked to go home. Talks began between the Navajo headmen and the Peace Commission.

Negotiations with the Indians resulted in the Treaty of 1868 signed on June 1st, 1868. The Navajos were allowed to return to their traditional homelands in the four corners region of the southwest.

Today the Navajo Nation is the largest Native American group in the United States with a population of over 325,000.

Visit Fort Sumner Historic Site and experience the history of this area.

Visitor center displays and an interpretive trail provide insight into the tragic history of the Bosque Redondo Indian Reservation.

At its peak in the winter of 1864, more than 8,500 Navajo and nearly 500 Mescalero Apache people were held at the Bosque Redondo Indian Reservation.