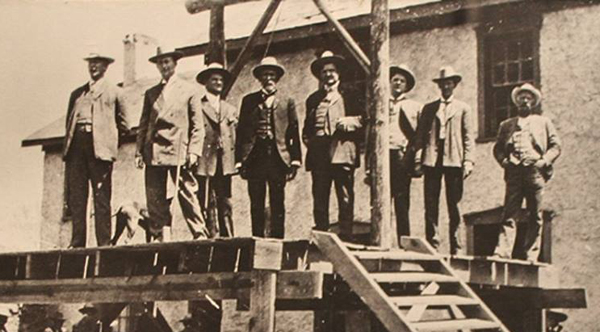 Lincoln owes it's existence today to an infamous young man who became known as Billy the Kid.  But long before Billy and the events of the Lincoln County War, this area was first home to a group of indigenous people called the Mogollon, followed by the Piros and later the Mescalero Apache.

When Spanish-speaking, Native New Mexican settlers from the upper Rio Grande began arriving in the 1850s, the named their new home La Placita del Rio Bonito (the place by the pretty river).  In 1869, just four years after the end of the Civil War, the county and town were renamed for the  late President, Abraham Lincoln.

In 1873, L.G. Murphy established a store in Lincoln known as "The House" because of it's monopoly over commerce in the county.  When an enterprising young Englishman named John Tunstall arrived in Lincoln and opened a rival store and a bank, the autocracy of The House was threatened.  Additionally, Tunstall, along with his business partners, Attorney Alexander McSween and John Chism, planned to challenge Murphy's domination of the beef market supplying nearby indian reservations and forts such as Fort Stanton.

President Rutherford B. Hayes called Lincoln’s main street “the most dangerous street in America.” In this quiet one-street community visitors can walk in the footsteps of Sheriff Pat Garrett, Billy the Kid, and other infamous characters involved in the Lincoln County War, 1878-1881.

Special events are scheduled throughout the year.