A GOOD LIFE BY THE BIG RIVER

Coronado Historic Site has a long history that reaches back over two thousand years. Native Americans initially came to hunt game and gather wild plants in the lush Río Grande river valley. By A.D. 600, these first settlers were constructing pithouses (semi-subterranean earthen dwellings) on the terraces above the big river and had begun to farm the flood plain below. They were joined by immigrants from southern New Mexico, Arizona, Utah, and Colorado. Together, these groups constructed the Village of Kuaua around A.D. 1300. It grew to over one thousand rooms and ten kivas (underground ceremonial rooms). A unique multi-ethnic society flourished along the banks of the Rio Grande.

During the height of Kuaua, the interior walls of kivas were adorned with elaborate mural paintings of life at the village. Over time, these murals would be covered with blank layers of plaster creating a new canvas for the next mural. In one kiva there were over eighty-five layers of plaster with seventeen of them covered in vivid displays of animals and religious figures. These murals were uncovered by archaeologists in the 1930s and a selection are preserved and on display at the Coronado Historic Site Visitor Center. 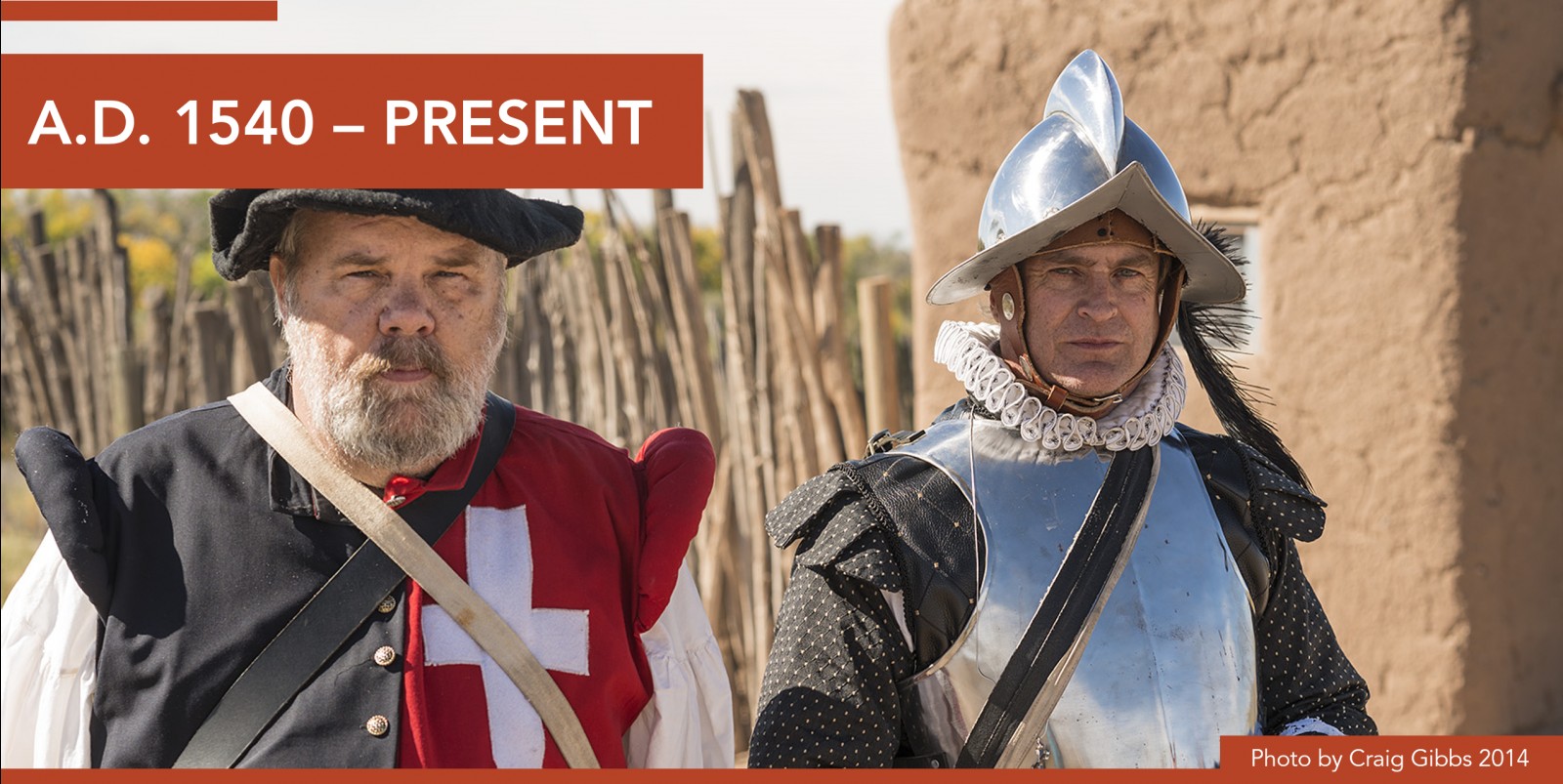 In 1540, an army of over one thousand European soldiers and native allies arrived from central Mexico. Led by Francisco Vásquez de Coronado, this force was spurred by hopes of finding treasures like those captured by Hernan Cortes among the Aztecs two decades earlier. They made war with those living along the Rio Grande, but failed to find the gold and silver they sought. As a result, Coronado ended the expedition and returned to Mexico in 1542. This marked the first of many Spanish-led expeditions into the Rio Grande Valley.

Following colonization of the area in 1598 by Juan de Onate, a Spanish hacienda (estate or plantation) was constructed just south of Kuaua. The encomendero (grant holder) stationed at the site taxed and exploited the people living in the village. Many died from these hardships and the diseases brought by the colonists. The once thriving settlement of Kuaua was abandoned following the Pueblo Revolt of 1680. It would remain unoccupied until the site was designated New Mexico’s first State Monument in 1935.

The story of Coronado Historic Site is complex and ever evolving. Staff, volunteers, and independent scientists actively conduct research on the thousands of artifacts that have been excavated from the site. As a result, new aspects of the site’s history are constantly brought to light.

Coronado Historic Site boasts a visitor center featuring three galleries with artifacts and information relating to the Village of Kuaua, the Coronado Expedition, and a rotating array of other related topics. The site also hosts vibrant and educational events, including Fiesta of Cultures every October.